We had westerly winds again today, which is not ideal for finding a wide variety of seabirds off Cape Hatteras. It’s not a problem for the more numerous species. You just don’t see as many Wilson’s Storm-Petrels (photo by Peter Flood) on a west wind as you would on a northeast wind, 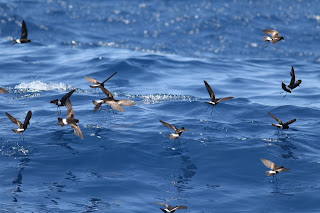 but because there are so many, you still get to see a bunch. The same goes for Cory’s Shearwater, now that they have arrived. Black-capped Petrel is also reliable in these conditions, and we saw them well today in modest numbers (photo by Peter Flood). 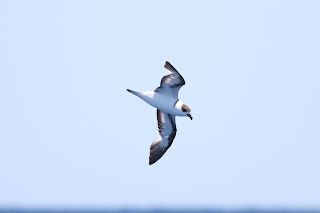 We were just seeing these three species as we idled around in the slope waters for the first hour or two, so we decided to drift in hopes of attracting a rare Pterodroma or a different storm-petrel. The water was a nice cooler blend of Gulf Stream and slope water unlike the hot fast water that was here yesterday. As soon as we stopped, I saw people on the bow deck looking upward excitedly. Sure enough, a tropicbird was directly over the boat checking us out (photo by Peter Flood). 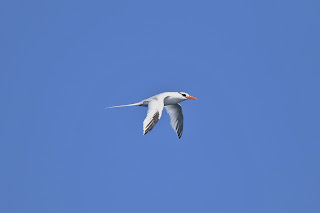 It was a subadult Red-billed Tropicbird, and it stayed around for several minutes and gave great photo ops. Kate threw out some squid heads and it did not partake, but a nice bull dolphin (mahi mahi) showed up to scarf them up. But the highlight of the drift for some of us was the appearance of a pod of Clymene Dolphins (photo by Lev Frid). 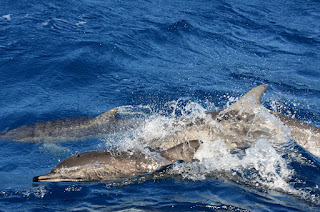 This is a scarce species that relatively few people have ever seen, and it is a very attractive and acrobatic animal. It is not something that we see every year, so we spent some time with them bow riding until they became disinterested. Farther out the water got even cooler and greener, and we gave up our search for a current edge about 35 miles out. The inshore tack to the shelf was pretty quiet, but when we got to the edge of the Gulf Stream in about 30 fathoms there was a nice color change with dozens of Cory’s Shearwaters (photo by Peter Flood), 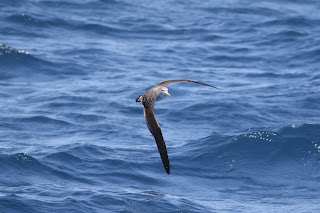 and several Red-necked Phalaropes. We got some great photo ops with the phalaropes, which were in high plumage (photo by Lev Frid). 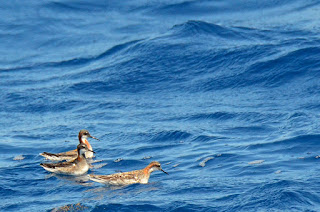 The wind is now southwest as I write this, and that is preferable to west or northwest, so I am looking forward to seeing what we can scrounge up before we get some easterlies again later this week.

A big thank you to Lev Frid & Peter Flood for helping us lead the trips so far this spring & for working so hard to keep us in the photos!  A few more photos from today's trip below... 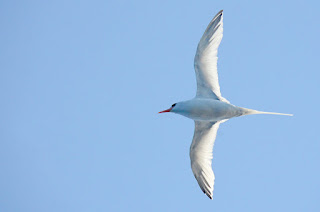 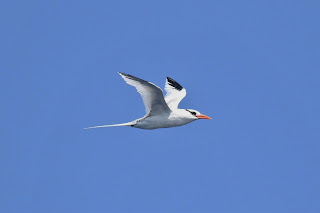 One more photo of the Clymene Dolphins (by Peter Flood) 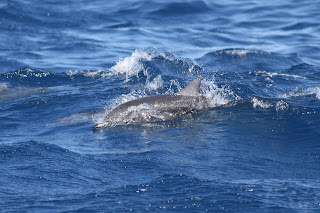 Our phalaropes in flight (by Peter Flood) 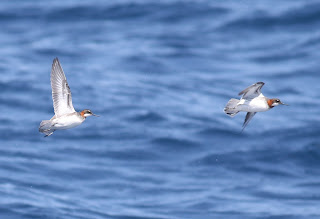 It was a good day for photographing Wilson's Storm-Petrels! (by Peter Flood) 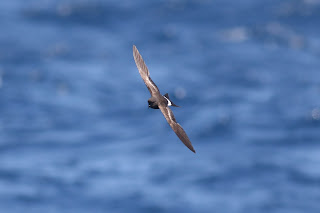 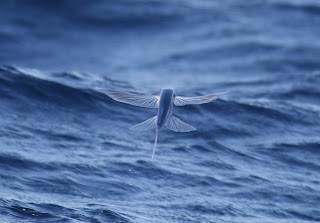 This mahi mahi looks like it might be lucky to be alive!  It was one of the group that came in to the boat to feed on some squid (by Peter Flood) 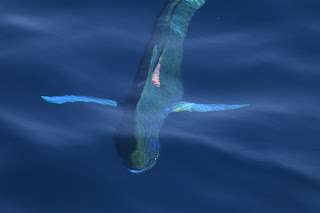