Just off of Hatteras North Carolina runs one of the most powerful of Atlantic currents.  The Gulf Stream runs up much of the coast of North America before angling off towards Europe.  It is a conveyor belt powerful enough to increase the temperature of both continents by brute movement of warm water.  This flowing river of seawater creates an ecosystem that covers a large portion of the Atlantic basin, and is host to a number of unique seabirds, marine mammals, and other marine life.  Due to the proximity of the Gulf Stream to Hatteras, we have unrivaled access to this amazing fauna.  Today was an exploration of some of the specialties of the region, and a thrill for all onboard the Stormy Petrel II.

Dropping from speed into blue water, the Stormy Petrel II had the company of several boats setting up to fish on the shelf-break.  Working clear of the company, we spotted something moving under the water- as it grew closer it became apparent that it was a Cobia swimming immediately above a Leatherback turtle (photo by Peter Flood). 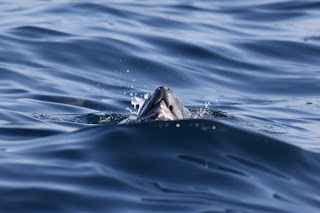 Almost exclusively feeding on jellyfish, these largest of extant turtles find and exploit areas where currents or wind patterns converge to create dense gatherings of jellies.  After a brief showing, we moved on to find some of the bird species deeper in this oceanic highway.

Wilson’s Storm-petrels and Cory’s Shearwaters were the first to come into the slick of fish oil and chum, before being interrupted by the avian landlords of this environment:  Black-capped Petrels (photo by Peter Flood). 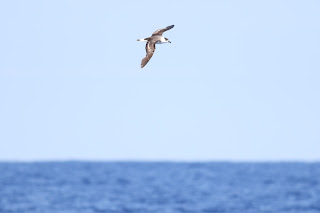 With relatively calm conditions and brilliant sunshine on the water, the black-and-white plumage of the petrels was picture perfect- showing every molted feather or subtle differences in facial pattern (white faced individual below - by Peter Flood). 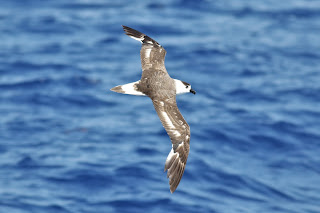 Offshore bottlenose dolphins, larger than their inshore cousins, joined us in increasing numbers.  First a mother and calf were bow-riding, and then 6 more. Looking up from the spectacle immediately under the rail, we soon realized that we were surrounded by large numbers of these large, acrobatic dolphins (photo by Peter Flood). At the end of the day we estimated to have seen 105-120 individuals. 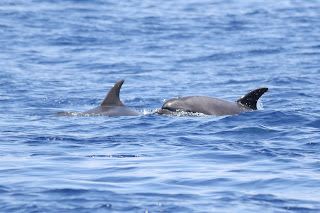 Pomarine jaegers accompanied the boat for much of the day, providing marine bird photographers with compelling targets at close range (photo by Peter Flood). 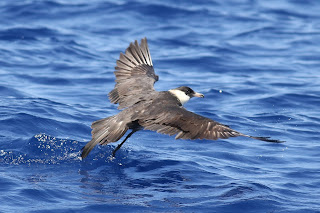 Other highlights included a good-sized Tripletail- an odd fish that is frequently found with floating debris (in this case a bucket, photo by Lev Frid), Band-rumped Storm-petrels, and colorful Man-o-war. 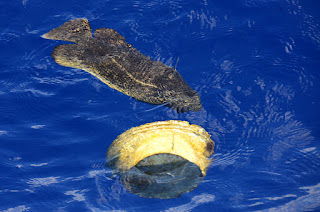 The real find for the day however was a true rarity.  Beaked whales were spotted at some distance away.  This group of whales is very poorly known, with most records coming from skeletons found on remote beaches.  As three individuals got closer we realized that they were Gervais beaked whales (photo by Lev Frid). 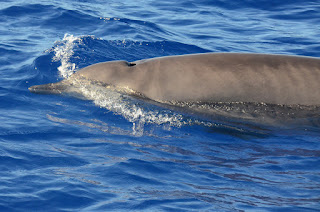 The whales moved towards us, lingering at the surface of the water and allowing all onboard to become members of a very exclusive group of people who have seen this animal alive.  Eventually the whales dove, leaving everyone high-fiving and in awe of how much remains to be found so close to home, and yet so far away.

Some Cory's Shearwaters show an intermediate amount of white in the under primaries like this bird below (by Peter Flood). 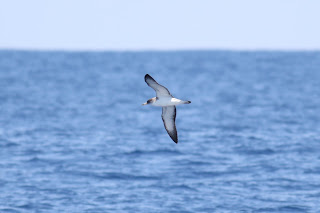 It was nice to see some Band-rumped Storm-Petrels today, like this fresh-winged bird that was photographed on our drift this morning!  Perhaps a younger, winter breeding individual?  (by Peter Flood) 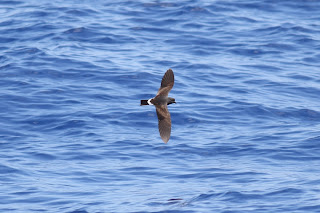 A few photos of the Gervais Beaked Whales:
Top photo is typical of the marking found on the back of females (by Lev Frid) 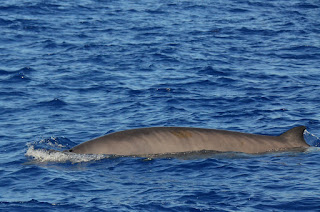 Here you can really see the beak - you can also see that there are no teeth, so not a male! (by Peter Flood) 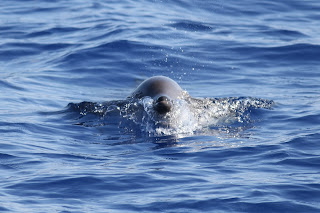 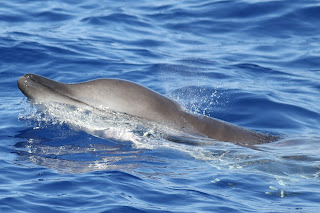 A closer look at the tripletail (by Lev Frid) 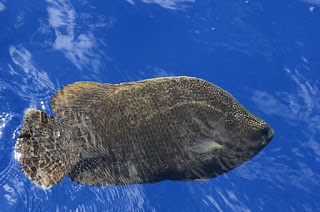 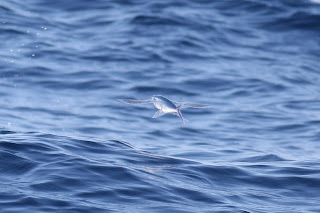