Any time we go offshore, it is an adventure.  Part of the draw of going out on the Stormy Petrel II is that we never know what we are going to see from one day to the next.  Today we headed out into blustery conditions blowing off of the open ocean.  We were ready for anything.
The day got off to a good start with a Parasitic Jaeger blazing past the boat, soon followed by a trickle of Wilson’s Storm-petrels and Cory’s shearwaters that would increase throughout our trip and become abundant.   From the wheelhouse, Brian spotted a piece of floating debris and instinctively slowed the boat.  “Bridled Tern!” came the shout over the loudspeaker as the tern lifted gracefully from its perch and into the air (photo by Peter Flood). 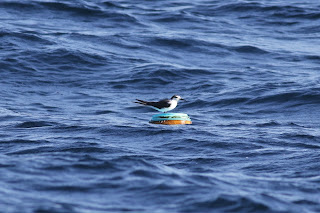 We stayed with it for a few minutes before moving out even further into the deep blue waters of the Gulf Stream.

Reaching the shelf break, our attending storm-petrels were joined by the stars of the Gulf-stream drama; Black-capped Petrels and Audubon’s shearwaters.  The Black-caps wheeled and banked effortlessly, as the Audubon’s hurried by frenetically.  One Audubon’s seemed to have a different style and moved closer and closer to the boat in a rather relaxed manner, prompting Kate to carefully note it was different as the bird shifted from head-on to a high banked turn, she was able to see the white undertail, and identified it as a Manx shearwater (photo by Peter Flood)! 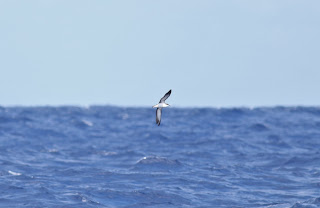 Our fourth shearwater species was a Sooty shearwater that sat on the water for us, allowing good looks and photos.

By this time, the storm-petrel flock in the slick was sizable, and was promting an enjoyable photo frenzy from our friends visiting from Scotland.  As larger Band-rumped and Leach’s Storm-Petrels appeared to our excitement, the Scots happily kept clicking away in search of the perfect shot of Wilson’s Storm-Petrel (photo by Peter Flood). 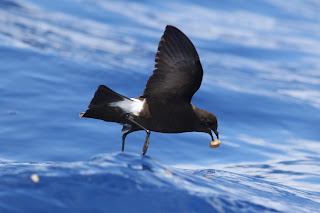 As we motored along, those standing on the bow got looks at a Gervais Beaked Whale through the chop, and while we were searching for it a Sperm Whale appeared.  We paralleled the distinctive blows along the shelf edge until we were all taken by surprise by a full breach (photo by Jeff Lemons)! 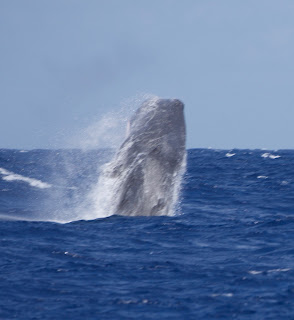 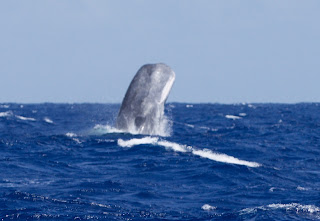 Almost no-one onboard had seen Sperm Whales in flight previously, and all were delighted.  After several more breaches, we started heading inshore accompanied by a photogenic Pomarine Jaeger.


After enjoying the birds of the Gulf Stream and our surprise encounter with a Sperm Whale in confused seas, the ride in was relaxing.  Two Atlantic Spotted Dolphins briefly joined us on the bow, reminding everyone of the endless possibilities of adventuring on the Atlantic during Spring Blitz. 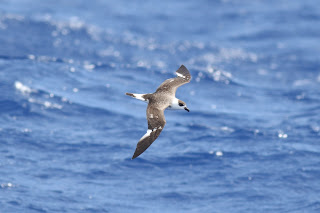 Cory's Shearwaters were quite attentive in the slick today!  (Peter Flood) 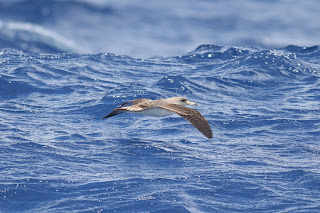 The Wilson's Storm-Petrels were also attentive and really gathered well for the photographers aboard when we gave them some of their favorite fish oil!  (Lev Frid) 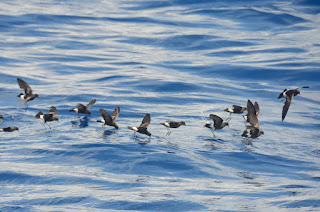 A shot of one of the Leach's that visited the slick today - a couple of others were spotted flying by outside of the slick.  (Peter Flood) 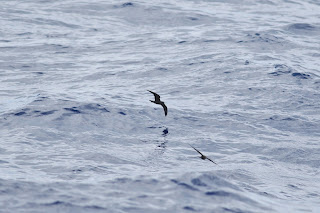 & the Sperm Whale diving!  They do not have a dorsal fin like you see on many other species of whale, but the hump you see here instead. (Lev Frid) 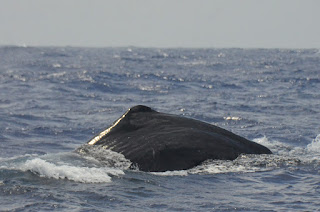 We passed a gorgeous Portuguese Man of War this morning & Lev Frid was able to capture this photo! 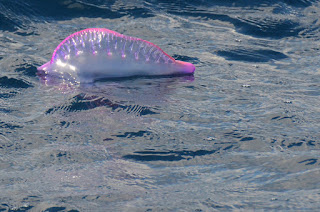