One of the reasons Hatteras is such a good place for pelagic birding is that it is generally rougher than most of the coast to the north and south. The Gulf Stream comes quite close here and the warm water is a weather maker. This morning when we left the dock there was hardly any wind, but it didn’t take long to find some a few miles off the beach. There was not nearly as much rain as I thought we might see, but the scattered rain squalls produced wind and choppy seas. The last ten miles or so out to the shelf break was slow going, but when we arrived at the blue water, it was a reasonable condition. The morning started out slowly, but we had some great looks at Leach’s  Storm-Petrels quite close to the boat (photo by Peter Flood). 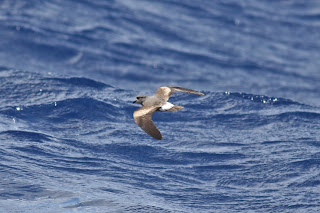 Black-capped Petrels made some nice passes too (photo by Doug Gochfeld), 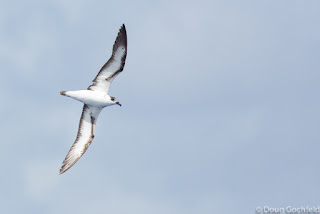 and we picked up a few Pomarine Jaegers as we went along (photo by Peter Flood). 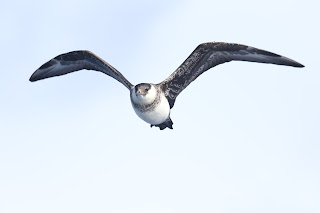 Band-rumped Storm-Petrels were tough today, but I think most people who put the time in out on deck got to see them. We made it about 34 miles out before I started our inbound tack. Sometimes this can be the most productive part of the day- especially if there was not much of a morning flight. Today the inshore tack was excellent, and we amassed a nice following of Black-caps, Cory’s Shearwaters, storm-petrels and Pomarine Jaegers. Around 1220 a Fea’s Petrel joined this entourage for a few minutes, and gave us excellent looks and photo ops (photo by Doug Gochfeld). 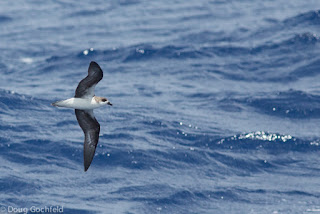 The Fea’s was soon followed by another red letter bird. A Masked Booby appeared suddenly as if it dropped from the sky and it too stayed around the boat for a few minutes (photo by Peter Flood). 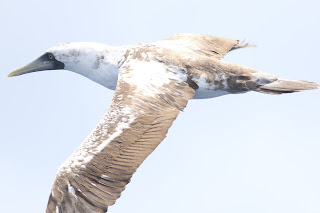 This was our first for the year, and the first time we have seen a Masked Booby in spring for a few years. Soon after the booby came sailing in, another new seabird joined our flock. South Polar Skua was also a new species for this year, and the skua followed us for miles (photo by Peter Flood). 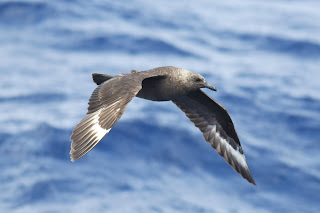 Before we made it back to the shelf break we also picked Great and Manx Shearwaters. We looked hard for a Sooty Shearwater on the ride back in but drew a blank. There was, however, a nice flight of Cory’s Shearwaters in close to shore. It looks like southerly winds are in store for tomorrow, so the inshore flight may pick up and there should be some good action out in the deep. 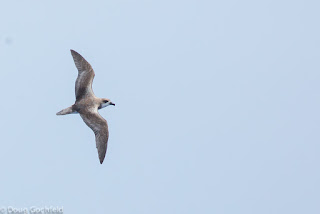 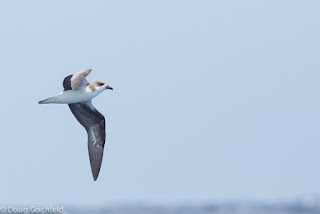 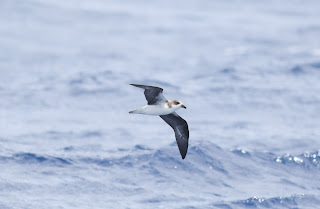 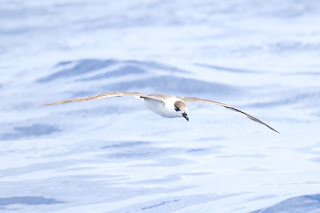 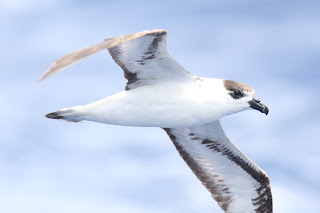 We had a nominate Cory's, or Scopoli's Shearwater, follow us in the slick for awhile late in the afternoon!  Note the small bill & petite shape of this individual (Doug Gochfeld) 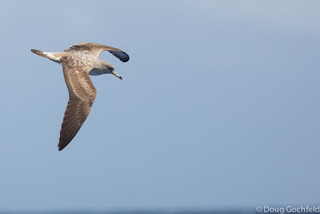 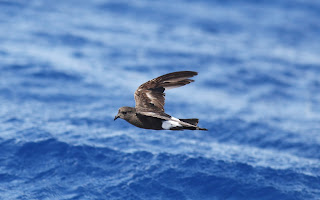 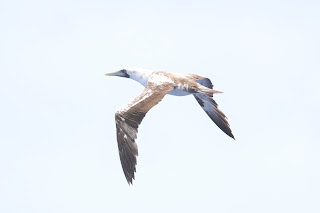 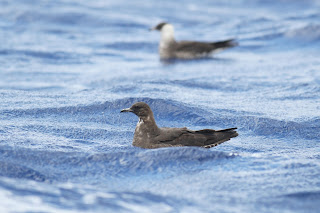 Our Black-capped Petrels were harassing the jaegers again today!  They did not leave the South Polar Skua alone either, though the photo below is of a Pom & a Black-cap (Doug Gochfeld) 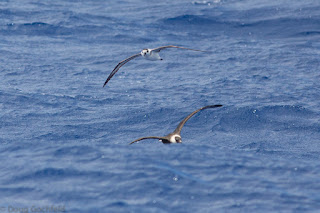