After staying ashore for yesterday’s nasty southeaster, we were eager to get back out to the Gulf Stream and see what had changed with the passage of the low pressure system. It was cool and cloudy, and when we got to the ocean there was about a four foot swell rolling into the inlet. The wind was light from the north. When we got out to the edge of the continental shelf, it was obvious that things had changed. Instead of jaegers we found several Cory’s Shearwaters. We had only seen four Cory’s on our trip two days before, and it was not long before we had four Cory’s in view at the same time (photo below of a nominate Cory's, also known as Scopoli's, by Peter Flood). 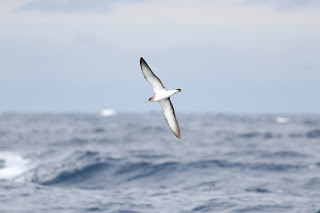 We slowed down and made a slow tack out to the slope waters. There we found good numbers of Black-capped Petrels and our first Band-rumped Storm-Petrel of the season.  There were also good numbers of Wilson’s Storm-Petrels and the occasional Audubon’s Shearwater. We did not find much Sargassum, but when we found a faint streak near a diffuse temperature break we slowed down to check it out, hoping to find some flotsam and maybe a Bridled Tern. What we found was a school of Mahi Mahi that came in to feed on our chum (photo by Lev Frid). 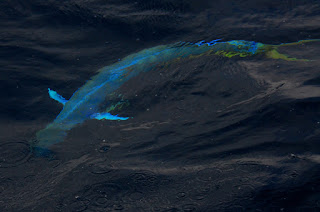 We had a box of Spanish Sardines in the cooler and they put on quite a show zipping around and competing for these handouts. While we were feeding these fish, a flock of Bridled Terns came by and made a nice pass by the starboard side (photo by Peter Flood). 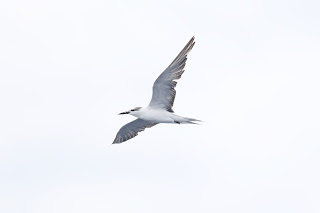 These were our first Bridled Terns of the year, and it was good to get them on our second spring trip.  After the terns passed by we spent the next couple of hours zigzagging back and forth between 76 and 79 degree water. There was more wind and current out in the hot water and we did well with Black-capped Petrels and Cory’s coming in to our slick for good views and photo ops (Black-capped photo by Peter Flood). 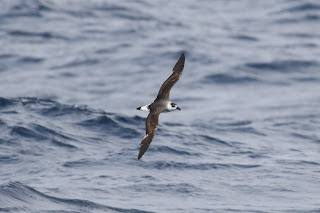 Shortly after noon while we were in the warmest water, a dark morph Trindade Petrel flew in for good views (photo by Peter Flood). 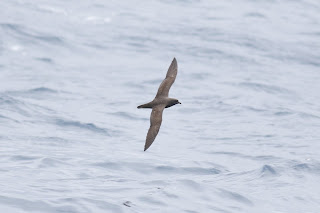 Following that we made an inshore tack for a while. When we tacked back out to the hot water and rougher seas, we had another dark Trindade fly in and remain in view for a few minutes (photo by Peter Flood). 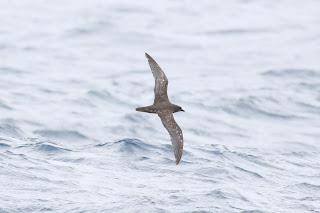 We also found a Leach’s Storm-Petrel nearby. On our final inshore tack, a Great Shearwater came in for the slick. This was another first for the season (photo by Peter Flood). 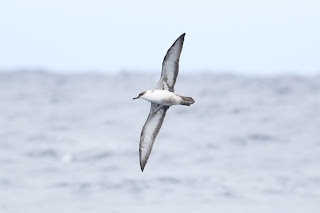 Back in close to the beach we saw a single Sooty Shearwater. Two days ago there had been several Sooties around a quite few jaegers, but there were no jaegers for us to today and just the one Sooty. Other highlights of the day included a Kemp’s Ridley, a Leatherback, and a few offshore Bottlenose Dolphin (photo by Lev Frid). 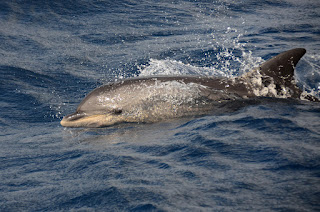 Thanks to Kate Sutherland, Peter Flood, and Lev Frid for leading and spotting today. Things ran like well oiled machine. As a footnote, this was 25 years to the day that Bob Ake led a small group of keen birders from Hatteras on a pelagic trip and Killian Mullarney came back with the first photos of Trindade Petrel off NC. This was the second documented record off the NC coast after Dave Lee’s 1978 specimen. This was an important discovery that got birders out looking more in the deep water and during the spring season off Cape Hatteras.

Photos below by Peter Flood:
First Trindade Petrel of the day: 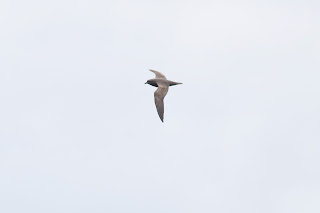 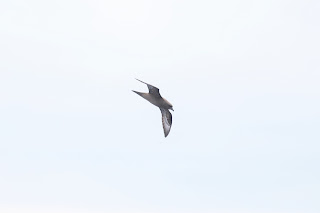 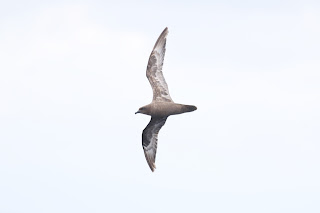 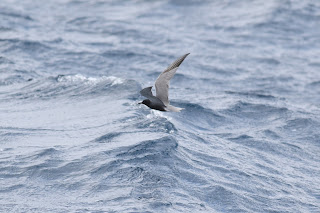