Three days left of the 2015 Spring Blitz, and every day has been different. Today, after passing through a few shearwaters and jaegers on the transit offshore we came upon some dolphins, and then a feeding flock of Cory’s, Great, and Audubon’s Shearwaters near the shelf break – just like yesterday, but with nicer sea conditions, a low swell and light easterly wind. It was a pretty day to be out, and we enjoyed some great flyingfish as well. But then it got quiet, and hot. The tropical Atlantic is the second biggest desert on the planet (after the tropical Pacific), and by mid-late morning we came to appreciate that just because it’s full of water doesn’t mean it’s not a desert. The 360-degree vista of blue water was punctuated by only a handful of Wilson’s Storm-Petrels in the wake, as we headed deeper into the desert. Few people realize that Black-capped Petrel is an oceanic desert species, adapted to cover huge areas in search of food, and we did have a few nice views of this threatened gadfly petrel. But mostly it was hot and seemingly lifeless.
Around lunchtime, however, a cry of “jaeger in the wake” stirred folks to life, and one, then two, then three jaegers were behind the boat – two Long-tailed and a Parasitic, affording great comparisons. Then a Pomarine Jaeger came in, a few more Long-taileds, and a couple more Pomarines – wow! For well over an hour we got to study all three jaeger species together, including 1st-summer, 2nd-summer, and adult-type of both Long-tailed and Pomarine, along with an uncharacteristically cooperative 2nd-summer Parasitic. A few Great and Cory’s Shearwaters joined the fray as numbers of Wilson’s Storm-Petrels increased – we had found an oasis of birds out in the desert. A Bridled Tern and a very obliging Arctic Tern appeared, and then Kate spotted a Scopoli’s Shearwater in the wake, amid the ‘blizzard’ of jaegers. It was a once-in-a-lifetime experience, and surely millions of electrons were captured by the digital cameras on board!

Heading back we enjoyed more flyingfish, and closer inshore a couple of Manx Shearwaters flew by. Well within sight of land Bob spotted a skua on the water and Brian pulled the boat right up to a very confiding South Polar Skua - nice. A few more shearwaters, some Spotted Dolphins, and a turtle rounded out the transit back to the inlet after ‘just another amazing day at sea.’ As they say, ‘today was typical of today.’ You never know what you’ll see, or when.

Thanks to our leaders: Steve Howell, Bob Fogg, & Jeff Lemons - and thank you to Steve & Bob for the blog photos!  Big "Thank You" to Steve for writing today's post and some of the captions, he very kindly gave me more time to sleep tonight!!  -Kate


Photos: Steve's have his name on the photo, Bob Fogg's are labeled!
Black-capped Petrel, white-faced 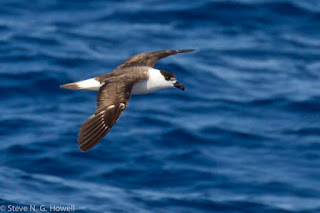 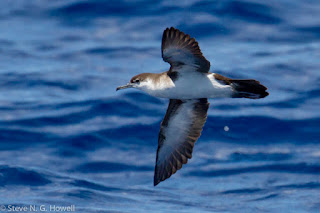 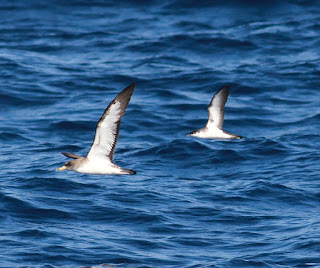 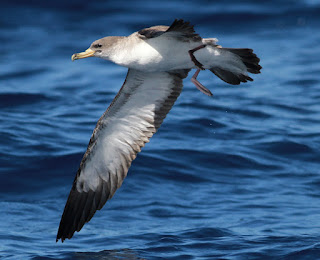 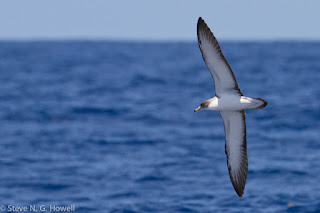 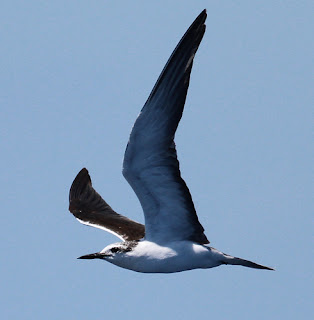 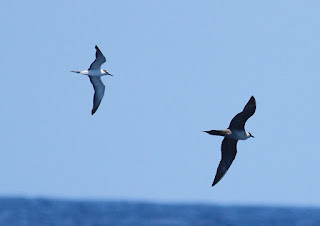 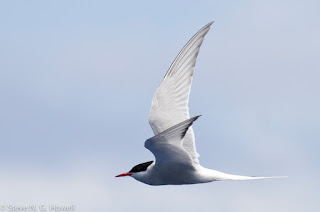 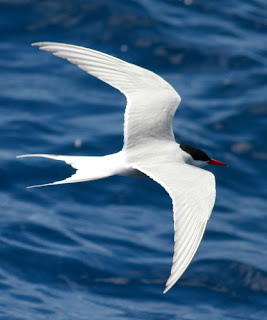 South Polar Skua on the water by Bob Fogg 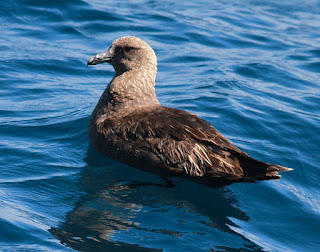 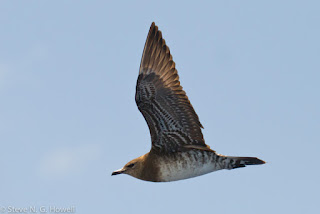 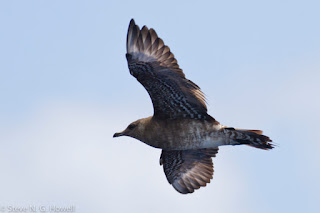 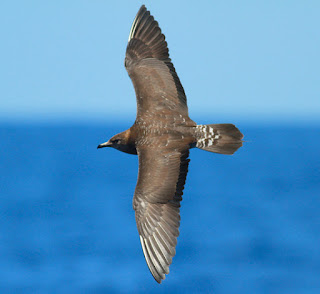 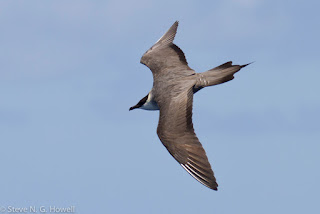 2nd-summer Long-tailed Jaeger, ventral – note the barring under the wings 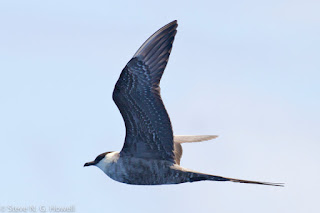 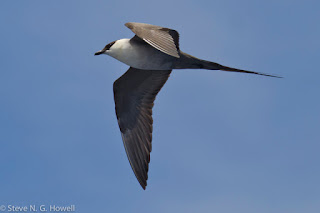 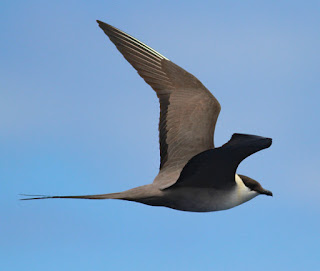 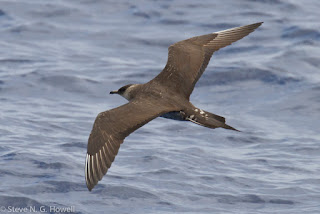 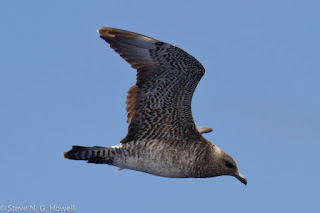 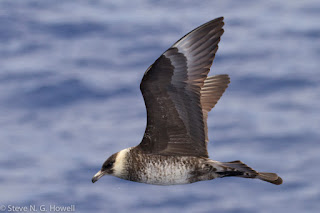 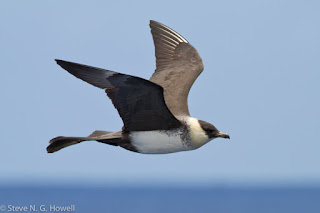 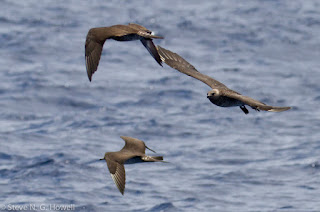 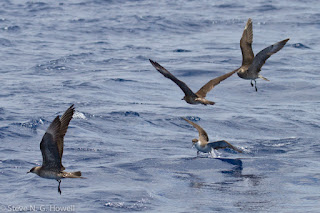 Pomarine (behind) and Long-tailed Jaegers, 1st-summers 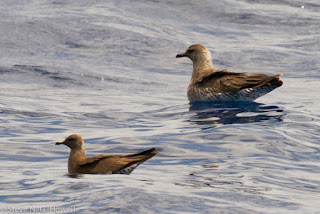 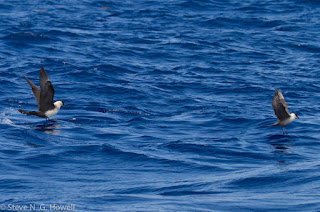 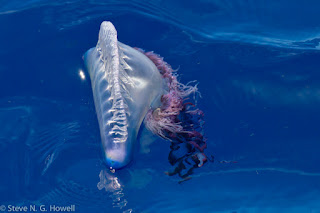 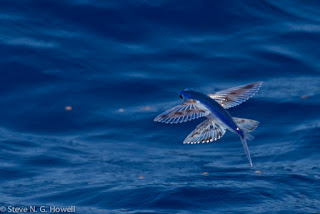 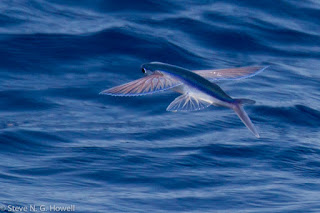