The Stormy Petrel II had another fantastic adventure on 26 May, 2015. Departing the docks at a sharp 5:30, Cpt. Brian Patteson made his way around the tail end of Hatteras Island and headed for open water. Conditions were clear but a little rough, which made for slow going. We were joined by a group of young Atlantic Spotted Dolphins, who were playing in the waves that we found challenging. Dropping from running speed at about 8:30, the first bird for most aboard was a South Polar skua! The bird flew steadily out of sight, allowing for brief, but clear views. It was quickly replaced by a white-faced Black Capped Petrel sitting on the water, which allowed for a close approach before taking flight. This pattern, of small numbers of a diverse selection of birds, would hold throughout the day.
Wilson’s storm petrels slowly gathered in the fish oil slick that Kate purposefully dripped from the stern. They were joined by four species of shearwater - the lacksidasical flight of Cory’s contrasting with the more purposeful Sooty and Great shearwaters, and the manic little Audubon’s shearwater that would pass by all day at high speed. The erratic, bounding flight of Leach’s storm petrel separated it easily from the smaller Wilson’s storm petrel, when one of the participants noticed a whale blow.
“Sperm Whale!” was the shout from Brian’s wheelhouse as the lopsided spout puffed to one side. The whale spent nearly 10 minutes at the surface with us before raising it’s squared off flukes into the sky and sounding. We were above a marine canyon- deep water that would harbor the squid that these whales feed upon. They weren’t the only squid hunters in the area, and several Pilot whales were seen nearby, with Common Terns above. Some of the dorsal fins didn’t seem quite right though, and Steve Howell was the first to put the pieces together as he ID’d the species: “Rough-toothed Dolphin.” Tight groups of these odd looking, rare dolphins, slowly showed the field marks: a distinctive angular dorsal fin, a ‘reptilian’ head shape without a break between the ‘beak’ and the ‘melon’, white/pink lips, and a dark ‘cape’ marking along the back. Seen rarely in these waters, even Brian and Kate have only seen this species a handful of times. A little later in the day, offshore Bottlenose dolphins would allow for comparison, rounding out an amazing day of cetacean sightings.
The roll-out of species would continue, with shearwaters, petrels, and storm petrels all visiting the slick as we traveled north with the Gulfstream. Bob Fogg and I were discussing Tropicbirds on the bow, when one appeared as if by invitation. The White-tailed tropicbird dropped from above amidships, and proceeded to circle the Stormy Petrel II for more than 5 minutes, allowing everyone onboard great views of this sought-after species. Re-energized by the tropicbird encounter, the whole boat settled into finding Band-Rumped Storm Petrels, with Nate Swick leading the search among the Wilson’s and distinguishing Band-Rumps from Leaches. This activity was interrupted only by a challenging young jaeger, identified with photos as a Parasitic.
Working our way back inshore, we stopped to watch three Arctic Terns working a minor windline of Sargassum, their crisp wingbeats and long-tails distinctive over the blue water. Several adult Pomerine jaegers finished the day, spoon shaped tail feathers visible even from a distance. Coming back into the sound, everyone onboard was happy with another productive Spring Blitz trip to the Gulf Stream.
Thanks again to Brian, Kate, and the expert spotters Steve Howell, Bob Fogg, and Nate Swick for getting everyone on good birds safely. 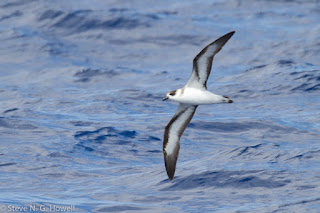 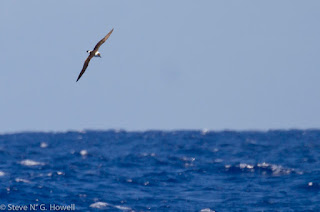 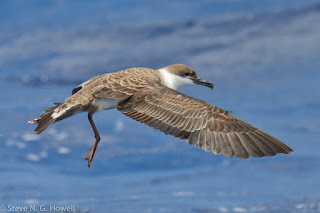 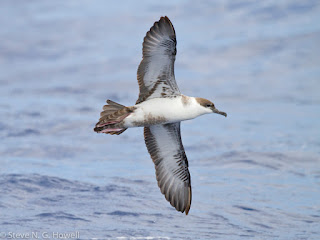 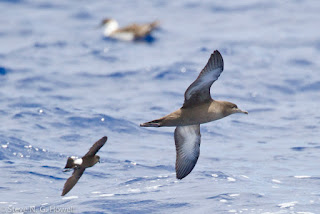 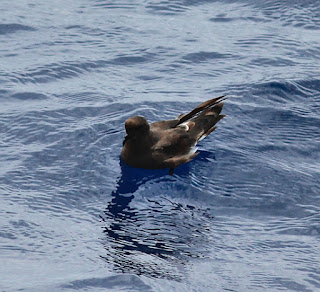 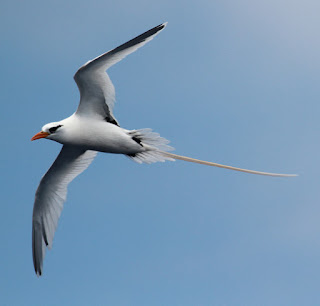 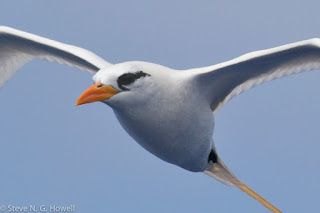 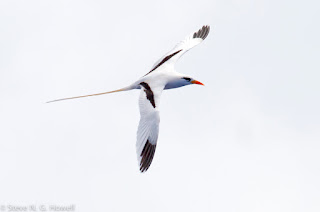 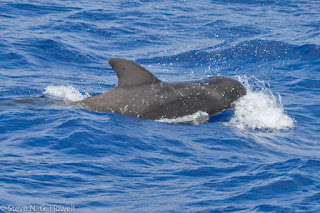 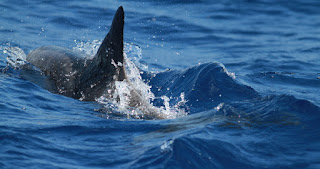 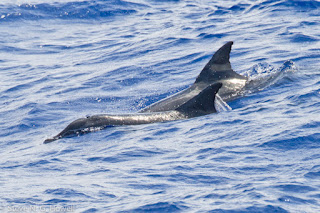 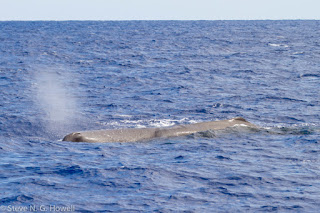 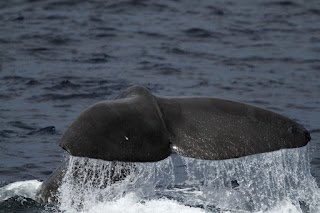